The image: Come Hell or High Water by COCO AMARDEIL more about this image below

Sleep – In a Nutshell

What Happens When You Sleep?

Home /Sleep Topics/ What Happens When You Sleep?

When you sleep, your body undergoes a series of changes that enable the rest that is vital to your overall health. Sleep allows the brain and body to slow down and engage in processes of recovery, promoting better physical and mental performance the next day and over the long-term.

What happens when you don’t sleep is that these fundamental processes are short-circuited, affecting thinking, concentration, energy levels, and mood. As a result, getting the sleep you need — seven to nine hours for adults and even more for children and teens — is crucial.

What happens during sleep, including how distinct stages of sleep unfold, demonstrates the complexity of sleep and its importance for our well-being.

How Does Sleep Change During the Night?

During a normal sleep period, you progress through four to five sleep cycles. Each sleep cycle is made up of four individual sleep stages.

The first three stages of sleep are comprised of non-REM activity. Stage 1 is short, representing the act of dozing off and transitioning into sleep. In Stage 2 the body and mind slow down as you settle into sleep. It’s easiest to be awoken during these first two stages.

In Stage 3, also known as deep sleep, the body is in recovery mode, slowing down even further. At the same time, overall brain activity slows and shows a tell-tale pattern of pulses of activity1 that are believed to help prevent unwanted awakenings.

The fourth stage is REM sleep. During REM periods, brain activity shoots back up to levels similar to when you’re awake – which explains why REM is associated with the most intense dreams. While breathing and heart rate increase during REM sleep, most muscles are paralyzed, which keeps us from acting out those vivid dreams.

Each sleep cycle takes between 70 and 120 minutes2. In the first sleep cycles of the night, more time is spent in non-REM sleep. The majority of REM sleep happens during the second half of the night. The progression of sleep stages and cycles in one sleep period is known as sleep architecture. 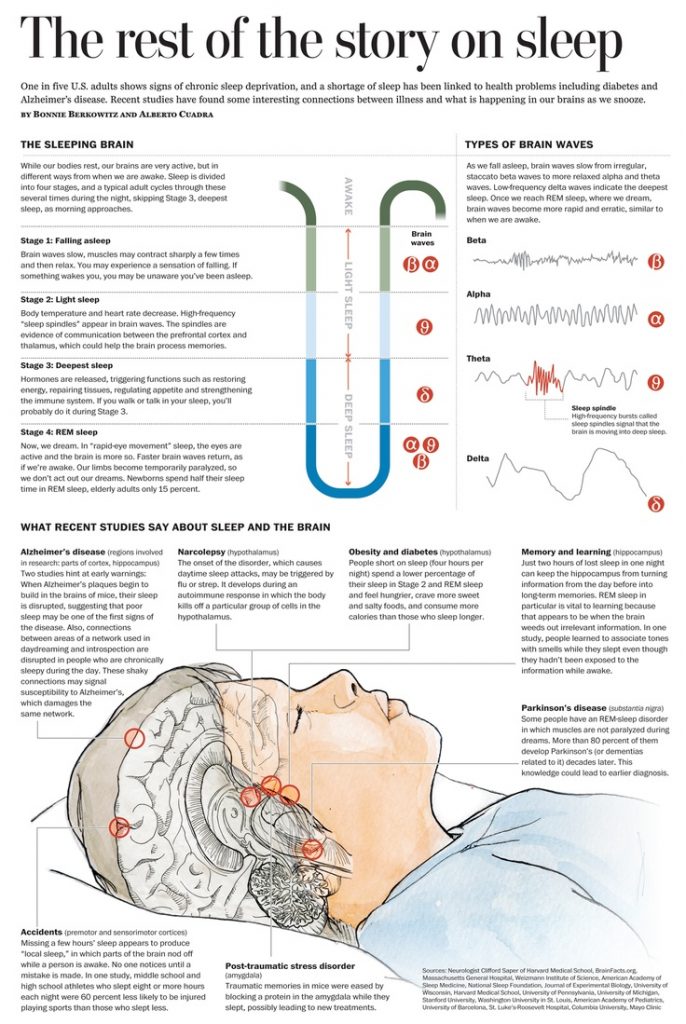 What Happens To Your Brain and Body During Sleep?

Virtually every part of the body3 experiences notable changes during sleep. Upon falling asleep, thousands of neurons in the brain switch from waking to sleeping state4, sending signals throughout the body.

While the biological role of sleep still isn’t fully understood, research demonstrates that it reinforces the cardiovascular and immune systems and helps regulate metabolism. What happens during sleep can be seen in notable changes in core bodily processes.

Breathing slows during non-REM sleep with respiration reaching its lowest rates during deep sleep stage three. Breathing ramps up and may become irregular during REM sleep.

As with breathing, heart rate begins to slow during Stage 1 and reaches its slowest pace during Stage 3. On the other hand, during REM sleep, the pulse quickens to nearly the same rate as when awake.

Muscles gradually relax during each stage of non-REM sleep, and the body’s total energy expenditure drops5. During the REM stage, most muscles are paralyzed in a condition known as atonia. This keeps the legs and arms from flailing in response to dream content. Respiratory and eye muscles stay active, though, and the darting of the eyes behind closed eyelids is the inspiration for the name rapid eye movement sleep.

When measured during sleep, brain waves show clear patterns associated with each sleep stage. In the early parts of non-REM sleep, brain waves slow down considerably; however, in Stage 2 and Stage 3, there are numerous quick bursts of brain activity.

In REM sleep, brain activity accelerates, showing markedly different types of brain waves. Heightened brain activity is why REM sleep is known as the stage most associated with vivid dreaming.

REM sleep is thought to enable critical cognitive abilities6, including memory consolidation, but non-REM sleep, even with reduced brain activity, is also believed to play a role in facilitating proper brain function while awake.

Dreaming is most prevalent and intense during REM sleep, but it can occur during any sleep stage7. That said, dreams that happen during non-REM and REM sleep tend to show different patterns8 with REM dreams often being more fanciful, immersive, or bizarre.

Sleep and the body’s internal clock, or circadian rhythm, play an important role
in regulating the production of numerous hormones9 including:

Growth hormone, which supports bone and muscle development as well as metabolism

Cortisol, which is part of the body’s stress response system

The image on top

The youth of today live in a time where uncertainty about the future—fueled by a distrust of politics, institutions and the media—has reached epic proportions.

The mass of contradictions created by past generations has left them with a lot of grey areas. As a result, they are overcome with apprehension and anxiety about their place in a confused and changing world—a world without any reliable points of reference and a thousand different forms of violence.

It is this moment in life, a time of soul-searching and self-discovery, that I wanted to capture through this series of portraits. This generation—the generation that will make up the world of tomorrow without having much of an idea of where they are going or what they want—is just trying to keep their heads above the sea of stimuli that surrounds them.