Here are our Forums. As a member of the Sparky community, you can post, poke, comment, discuss and share all kinds of stuff, just keep it cool, clean and positive, as much as possible. We are a closed community but open to meaningful messaging, sensible creativity and common knowledge.

So start a topic here that anyone can join and discuss, the topics can be retricted to friends on SSC or open to the world – by sharing with other social media platforms or by invitation or discovery.

Living with the Internet (No replies)

Medical research now shows how the constant use of smart phones, tablets and computers by young people is a direct cause of mental health problems among modern teens and younger developing minds.  discussion about 'Internet Ethics' and how society has been affected, and how to apply real time social ethics to life on the internet - this is very relevant to best

What do you think? What about 'Social Internet Ethics' and how can a global society deal with this virtual society and all its unnatural distractions. How can we apply real time social ethics to social media - and how can we help younger people understand best practice and self defence when using the internet.

And this from Denis Campbell - Health Policy Editor - the Guardian, Friday 19 May 2017 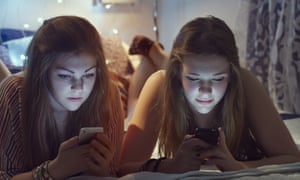 Four of the five most popular forms of social media harm young people’s mental health, with Instagram the most damaging, according to research by two health organisations.

Instagram has the most negative impact on young people’s mental wellbeing, a survey of almost 1,500 14- to 24-year-olds found, and the health groups accused it of deepening young people’s feelings of inadequacy and anxiety.

The survey, published on Friday, concluded that Snapchat, Facebook and Twitter are also harmful. Among the five only YouTube was judged to have a positive impact.

The four platforms have a negative effect because they can exacerbate children’s and young people’s body image worries, and worsen bullying, sleep problems and feelings of anxiety, depression and loneliness, the participants said.

The findings follow growing concern among politicians, health bodies, doctors, charities and parents about young people suffering harm as a result of sexting, cyberbullying and social media reinforcing feelings of self-loathing and even the risk of them committing suicide.

“It’s interesting to see Instagram and Snapchat ranking as the worst for mental health and wellbeing. Both platforms are very image-focused and it appears that they may be driving feelings of inadequacy and anxiety in young people,” said Shirley Cramer, chief executive of the Royal Society for Public Health, which undertook the survey with the Young Health Movement.